Orval is a real stand out when it comes to Belgian beers. It is situated in the grounds of an Abbey and was created in 1931 to fund reconstruction works of the Abbey. Unlike any other Belgian Trappists, they have committed themselves to producing only ONE single beer — a unique decision that they have taken since the beginning. The brand and recipe have barely changed since 1931, with a combination of brewing techniques being used — spontaneous fermentation being one of them. Today, any profits made from the beer are re-distributed, a substantial sum going to charities and the rest going to the construction of the Abbey. 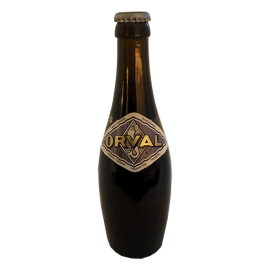 Orval Mixed Fermentation Trappist Ale
A great beer, enough said. No but seriously, from the recipe to the label, everything is unique and hasn't changed since the 1930s. This trappist beer uses a combination of brewing techniques including spontaneous fermentation.  Unlike other Belgian Trappists, Orval focuses on producing this on..
€3.50
Ex Tax:€2.85
Add to Cart
Add to Wish List Compare this Product
Buy Now Ask Question
Showing 1 to 1 of 1 (1 Pages)