New Zealand based Yeastie Boys was established in 2008 by Stu McKinlay and Sam Possenniskie, a pair who pride themselves as beer lovers and foodies first and foremost. They landed in the New Zealand craft beer pool with a splash in 2009 with the introduction of their flagship beer, Pot Kettle Black (South Pacific Porter) and since then, have owned the pool. Pot Kettle Black has continued to win awards for them while they have continued to build a stellar and consistent collection of brews around them. They now operate out of both Auckland and the UK. 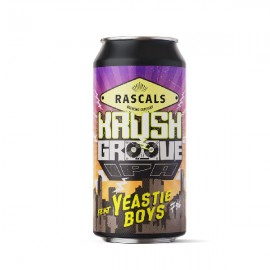 Rascals X Yeastie Boys Krush Groove IPA
A limited edition hop bomb made in collab between Rascals and New Zealander's Yeastie Boys! This brew packs a serious dollop of citrus and tropical flavours from the first sip until the last. A new school IPA made to be enjoyed to some old-school tunes. ..
€5.00 €5.50
Ex Tax:€4.07
Add to Cart
Add to Wish List Compare this Product
Buy Now Ask Question
Showing 1 to 1 of 1 (1 Pages)